I’d like to open this up with apologizing for the lack of posts recently – We’ve been extremely busy! I recently attended the Munich show and had an absolute blast with Paul Balayer and Glenn Waychunas looking at some amazing Kalahari and debating fluorescence versus phosphorescence (In a way the reason for writing this article – More below!), as well as making many great connections for the university. 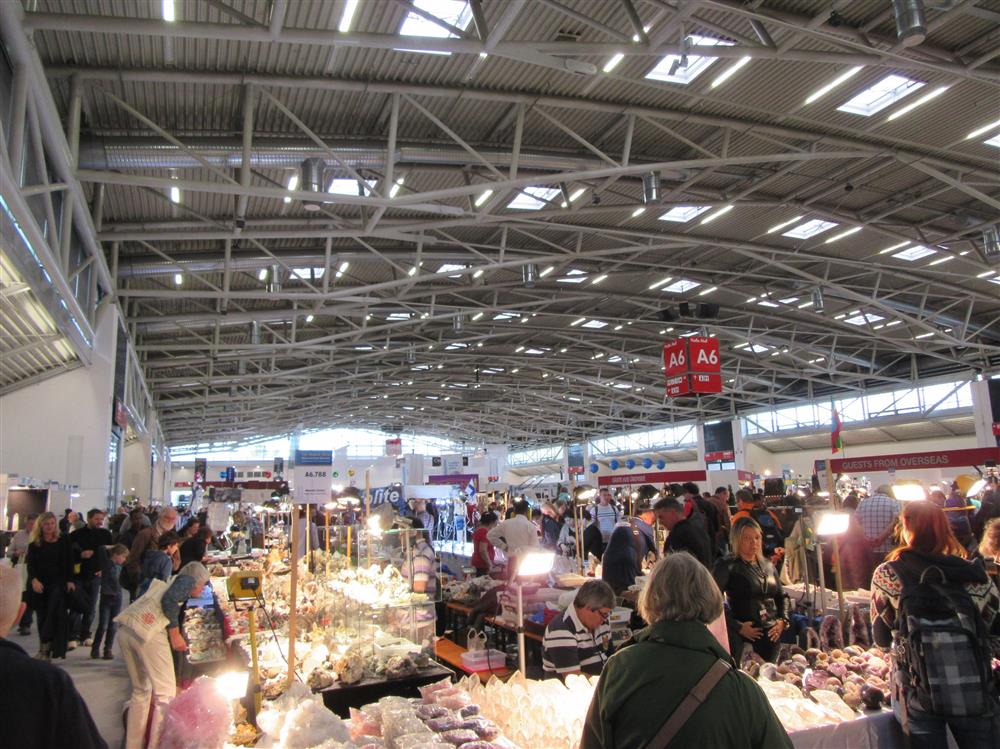 One of the most amazing things about bieng in a foreign country, meeting mineral collectors and dealers from across the globe, is the attitude of friendliness and general vibe - I think every attendee of the show has created unforgettable memories! This year some stunning finds out of Pakistan came to light - The Kunzite available at the show from a number of booths was to die for, and the minerals exhibit - Stunning! Pictured below is a psuedomorph from Tsumeb (Malachite ps. Azurite) in flawless condition - Look at those terminations! Many thanks to the show organizers for putting on a spectacular event! 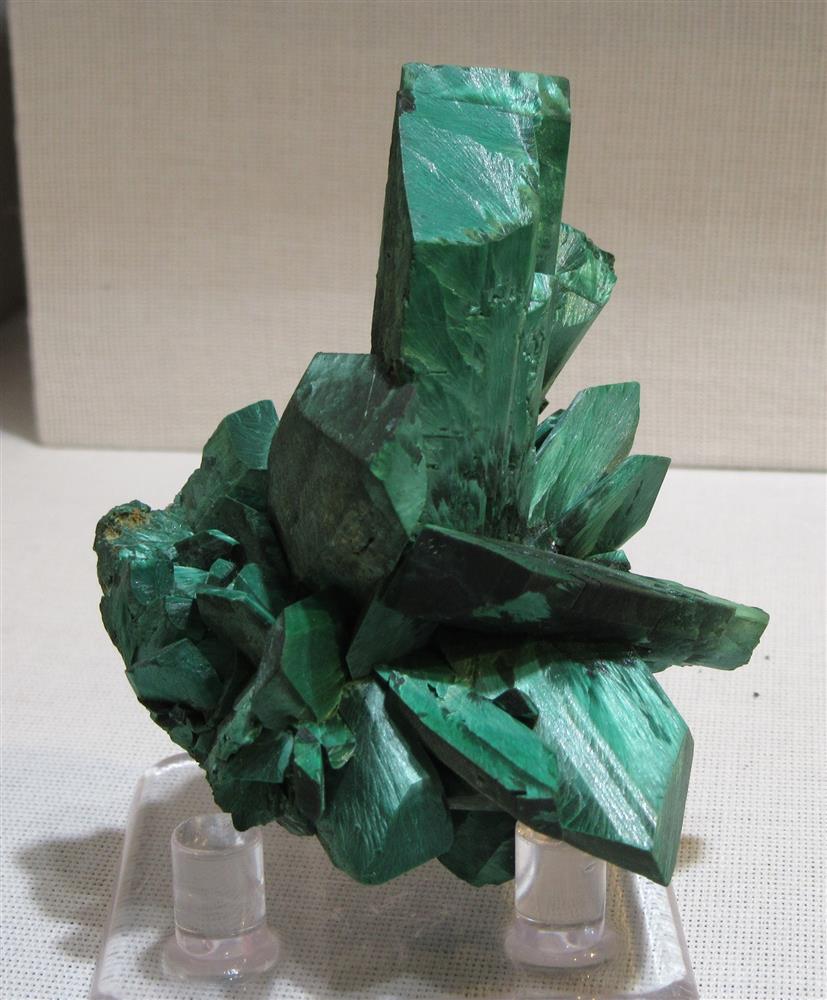 So, onto the meat of the matter!

Fluorite (CaF2) forms part of the Halides, and is most common in the isometric crystal system – Although octehedra and cubes are known to occur; rarely even dodecahedrons are seen! Fluorite has an extremely well developed cleavage (Many of the “crystals” one sees for sale are actually cleaved and not natural) – Cubic crystals will show flat, rectangular cleavage fragments and octahedra will show triangular shaped cleavage fragments. Penetration twins are also very common, and can make stunning display pieces!

Fluorescence and Flourite have a long history; Indeed, the term “fluorescence” owes it’s origin to the mineral, first described by George Gabriel Stokes in 1852! Fluorite will generally fluoresce blue, although yellow, white and other colours are fairly common. Fluorescence in Fluorite is generally attributed to the presence of mineral impurities, most commonly the element Yttrium. Pictured below are a series of fluorescent minerals (Under long wave UV) seen at the 2017 Munich Show.

Blue fluorescence, perhaps the most common colour seen from Britain, is due to inclusions of the element Europium in the crystal – Note the relationship here between Fluorite and rare earth species!

Indeed, this is not the only amazing, light emitting property of Fluorite – When heated to 100 degrees Celsius (Slowly, so as not to damage the crystal, but doable in the oven!) red Fluorite, also known as Chlorophane, with demonstrate thermoluminescence, and briefly exhibit the most stunning green colour!

Of course, perhaps one of the most common characteristics of Fluorite we all see (And often wonder about) are the stunning colours!

Most of the colours we see relate to mineral impurities of one type or another; Banded or colour zoned flourites simply show zonation in these impurities. Radiation also plays a role, especially with the well known deep purple Fluorite – Fluoride ions are “shoved” out of position, leaving gaps in the crystal lattice (Read, the three dimensional structure of atoms making up the crystal) allowing light to be distorted in such a way as to show the colour purple! 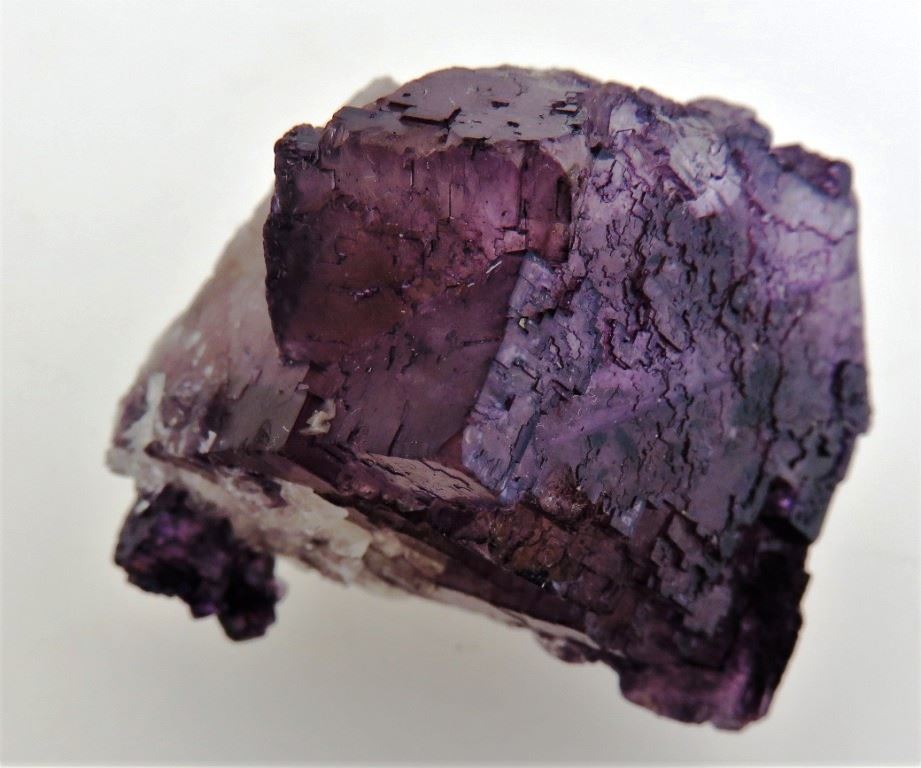 Perhaps one of the most famous varieties of fluorite, “Blue John”, originates in Derbyshire, England. Several small mines started in the 19th century, although now mining is sporadic and true “Blue John” is quite rare, with year on year production sometimes measured well below one ton. Showing a beautiful, zoned blue-purple colouration, the main purpose of extraction was always purely ornamental.

Indeed, HF will burn through all but a plastic container - Including glass (For the same reason HF attacks quartz!) A single drop in the skin is enough to get you into the ER; The acid quickly kills surrounding flesh and "soaks" through to the bone, attacking the Calcium and dissolving you from the inside out!

Leave your comment
Comments
Guest
13-01-2018 07:14 PM
Hi Rick - Shame, I did not know you were i Munic - i could have taken the trip down from Norway if I knew.
Good luck with Cape Minerals! Hope to see you in a year or two.