The pegmatites of the Lower Orange River

Many minerals from the pegmatites of the Lower Orange River are found online and at international gem shows - Come along with us and learn about the origin of some of these minerals, and see what collecting them in the bush is like!
One of South Africa's hidden gems, the Northern Cape province not only plays host to a collectors paradise, but some of the most diverse flora and fauna. Collecting in this area is a pleasure unto itself; an experience in sunsets over the river, quiet nights around the fire and the sweet scent of fynbos filling your lungs.
Often when asked, "Why do you collect minerals? What use is a rock?" I think back on the sights and experiences in the bush, the tranquillity of unbroken wilderness and the feeling of freedom in the wide open vistas. It becomes easy to understand why we go back time and time again..

The Northern Cape pegmatite belt extends from the town of Kenhardt Northwest towards the South African/Namibian border, following the trace of the mighty Orange River. The distribution of pegmatites in the area is irregular and possibly shear related (Namaquan Orogeny) - Large swarms of pegmatites are seen in the Kenhardt area, South - Southwest of Kakamas as well as East of Kakamas and in the Vioolsdrif area.
The belt itself is hosted in the rocks of the regionally extensive Namaqua-Natal metamorphic province, bordering the Kaapvaal Craton.
Shown below is the distribution of the belt, as well as an indication of host lithology. The belt does extend across into Namibia - However mapping of the Namibian region of the belt is still ongoing.
Little documentation exists on the pegmatites of the Namaqua Sector of the Namaqua-Natal belt, despite sporadic mining and ongoing interest from the 1900’s onwards. The age and origin of the parental magma forming the pegmatite belt is currently unknown, however it is well documented that the belt is younger, or possibly correlative with, the late stages of the Namquan Orogeny (~1.2Ga – 1.0Ga) as they intrude the various rock units related to this event (Villiers et al. 1959).

Paragenesis of the pegmatites

Villiers and Söhnge (1959) proposed an interesting model for the paragenesis of the pegmatite belt, which divides into three stages, described below. Ages for the respective stages are currently unknown; However dating of a monazite rich pegmatite in the belt (Steenkampskraal) has shown a date of 1050Ma (Haughton, 1969). It is important to note that the dating of a single pegmatite in the belt is suggestive of an intrusion age; However wider sampling is needed to confirm this.

This stage is marked by emplacement of microcline, orthoclase and plagioclase with minor quartz. Zircon and apatite are documented as accessory minerals during this phase, along with contact reactions (with the country rock) leading to the formation of minor biotite, epidote, titanite and rutile. Garnet is formed by autohydration of K-feldspar, and muscovite is formed by epimagmatic replacement processes (Villiers and Söhnge, 1959).

The hydrothermal stage breaks down into three main components -

Characterized by the formation of quartz-tourmaline veins and massive scheelite (Villiers and Söhnge, 1959).

Mineralogy of the pegmatites

Villiers and Söhnge (1959) suggest that the mineralogy of the pegmatites was highly similar across the belt prior to the post magmatic stage. Hugo (1970) used a classification scheme, as described below, to differentiate pegmatite mineralogy. Haughton (1969) classifies the mineralogy of the heterogeneous pegmatites as either simple or complex, whereby simple pegmatites are enriched in rare earth minerals and show only accessory amounts of beryl. Complex types are beryl, lithium and columbite – tantalite enriched along with allanite, gadolinite, fergusonite and other rare earth species. In addition to this both simple and complex types contain quartz, feldspar and muscovite.


That's great, but what about the minerals?

Finding specimens in the pegmatite belt is not as easy as one would think. The large majority of the pegmatites are classified as "Simple" - Of no interest to the rock hound, other than for their intrinsic beauty.

The area is famous for quartz rich in phantoms and inclusions, from haematite to chloride. Flourite production goes on in fits and starts from Riemvasmaak - Often coated with quartz that is removed using large amounts of the dangerous Hydrofluoric acid in barrels and other containers outdoors, generally without any protective gear. 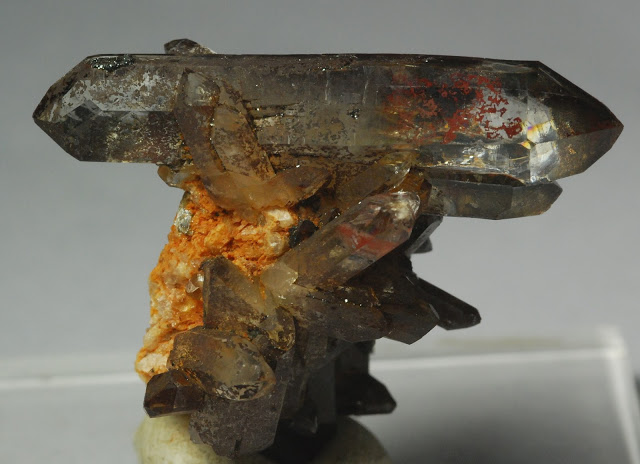 The large pegmatite bodies (Specifically Noumas II) are known for a wide assemblage of minerals, from phosphates (Libethenite) to neosilicates (Phenakite) and a host of other stunning specimens - Large garnets, rare finds of gem grade apatite and quartz specimens covered in highly fluorescent hyalite.
Many of the larger named pegmatite bodies have been mined on and off for over a century - At one point not too long ago the Noumas II pegmatite supplied the entire feldspar needs of South Africa. Considering this, often much of the core material of the pegmatite is removed and one has to look long and hard for the smallest of pockets. As the years go by the cost of production from these remote areas and communities is increasing, as the near-surface pockets become depleted and both locals and collectors have to range further and further afield to find good quality specimens. Gone are the days of crates full of minerals - Nowadays one pays dearly for a good pocket from this area.
Sporadic high quality finds are still noted - From amethyst to fluorite, nobody really knows what the belt will release from the clutches of geological time tomorrow. 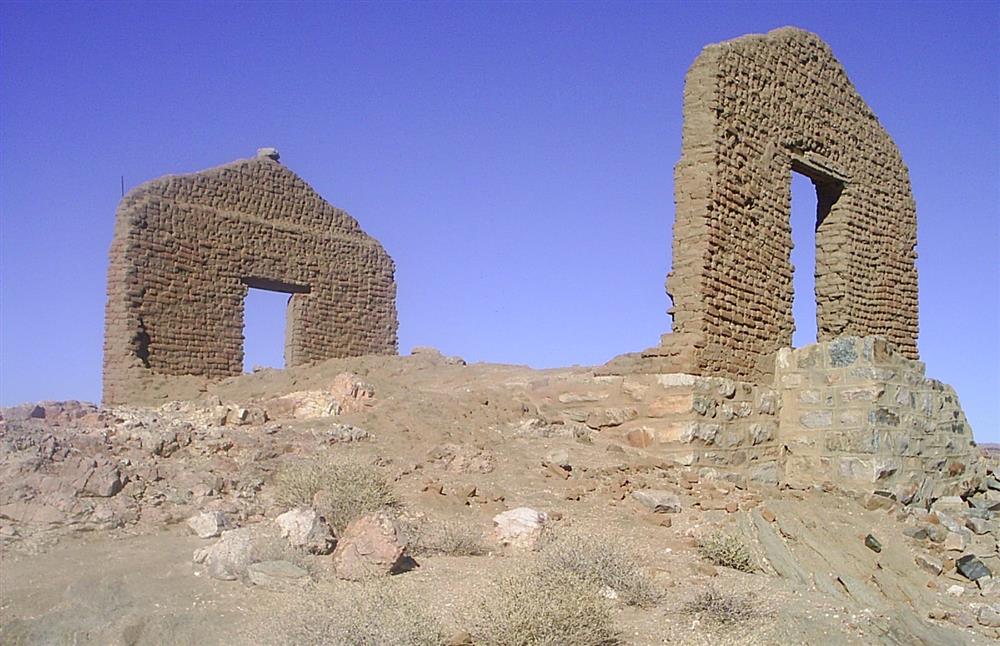 Cape Minerals offers many fine specimens from the pegmatite belt of the Lower Orange river, dating back to the year 2000. A limited amount of Phenakite from the 2008 find of this specimen, also currently (2017) featured on Wikipedia, will be available in February. First come first serve!